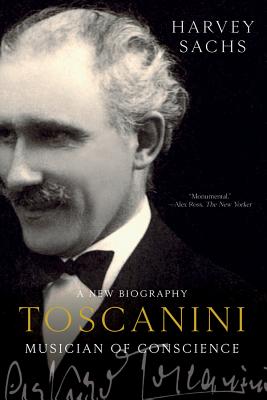 An “extraordinary” biography that “in its breadth . . . reminds me of nothing so much as Robert A. Caro’s The Power Broker” (New York Review of Books).

Harvey Sachs’s “monumental” (Alex Ross) biography recounts the sixty-eight-year career of conductor Arturo Toscanini (1867–1957), an artist celebrated for his fierce dedication, photographic memory, explosive temper, impassioned performances, and uncompromising work ethic. Toscanini collaborated with Verdi, Puccini, Debussy, and Richard Strauss; undertook major reforms at La Scala and the Metropolitan Opera; and eventually pioneered the radio and television broadcasts of the NBC Symphony. His monumental achievements inspired generations, while his opposition to Nazism and fascism made him a model for artists of conscience. In this “persuasive and compelling” new biography, Sachs illuminates the “crucial—the central—role Toscanini played in our musical culture for well over 60 years” (New York Times Book Review). Set against the roiling currents of twentieth-century Europe and the Americas, Toscanini is a “necessary” portrait of this “complex, flawed, but noble human being and towering artist” (Wall Street Journal) whose peerless influence reverberates today.

Harvey Sachs is the author or coauthor of ten books and has written for The New Yorker, the New York Times, and the Times Literary Supplement, among others. He lives in New York, and is on the faculty of the Curtis Institute of Music in Philadelphia.

Extraordinary . . . . Indeed, I cannot think of another biography of a classical musician to which it can be compared: in its breadth, scope, and encyclopedic command of factual detail it reminds me of nothing so much as Robert A. Caro’s The Power Broker. . . . Never before has [this] history been told so well.

[A] monumental new Toscanini biography. The most riveting pages are devoted to the nineteen-thirties and forties, when the conductor converted his favorite repertory—Beethoven, Verdi, and Wagner—into emblems of the fight against Fascism. I couldn’t help wondering: What would Toscanini have done if he had been confronted by geomusical snarl in Hamburg? He might have had something to say.
— Alex Ross

Without doubt the most engaging, the best-written and certainly the most comprehensive Toscanini yet to be published.
— Rob Cowan

A very engaging and at times gripping chronicle of music and society, all of it devoted to the unending drive and conscientiousness that made Toscanini’s performances so riveting—and, to some, so repellent. . . . What comes through in Sachs’s long chronicle is the extent of Toscanini’s role, witting and unwitting, in transforming the way that classical music was produced and consumed in the twentieth century.
— David Denby

Sachs’s account is persuasive and compelling in the important ways. . . . . Today, Toscanini is receding from our consciousness, notwithstanding his many records. . . . Creative geniuses can survive for centuries, even millenniums; interpreters inevitably go over the cultural cliff. But that doesn’t detract from the crucial—the central—role Toscanini played in our musical culture for well over 60 years. Nor from the almost universal regard he was held in as a man.
— Robert Gottlieb

Toscanini’s significance as a superb artist and a key figure in the international arena is brilliantly captured in Harvey Sachs’s absorbing biography Toscanini: Musician of Conscience. . . . [Sachs] paints a captivating portrait of the conductor, from his birth in Parma in 1867 to his final days in New York 89 years later. . . . [A] feast for those drawn to music, culture, and politics.

As a study of the life and times of one of the greatest conductors of all time, this book will not soon be bettered.

What cannot be denied is the fact that this new biography constitutes a tremendous achievement for which both fans of the conductor and music lovers in general will be eternally grateful. . . Sach’s new biography looks to be the most authoritative work on Toscanini that we are likely to see.
— David Hurwitz

'Sachs’ own dedication to this force of nature has been fulfilled in a book which ranks among the best of 2017.
— Philip Borg-Wheeler

No other musician had as great an impact as Arturo Toscanini on the performance of opera and symphonic music in the twentieth century. With tremendous passion and stubbornness—and thanks to his extraordinary talents—he reshaped our ideas about what a conductor’s goals should be and how to achieve them.
— James Levine

Sachs examines not only the artistic aspects but also the political, social, and private aspects of the man whom many consider the greatest conductor of his time. A reading of this biography helps us to understand this inflexible man, this musician who was so severe, also with himself, this conductor who represents a legend of the musical world, past and present.
— Riccardo Muti

Arturo Toscanini was a gigantic figure in the history of musical performance…Harvey Sachs’ new biography is the most complete and involving story ever written about this amazing life.
— Plácido Domingo

Arturo Toscanini was not only one of the twentieth century’s towering figures of classical music and opera, but an inspirational figure as the world-renowned Italian artist who stood up to fascism. In this monumental biography, Sachs artfully weaves together both of these stories, offering rich insight into music and politics across an extraordinary life.
— David I. Kertzer, Pulitzer Prize–winning author of The Pope and Mussolini

Considering the great impact Arturo Toscanini had on my family—and certainly my father, Carmine Coppola, his first chair flute during the ’40s—I would say that Toscanini’s powerful personality brought a unity to his conducting…He was the music he was conducting, the interpretive being…I am reminded of all of this in reading Harvey Sachs’s comprehensive new biography, which dramatically re-creates both the conductor’s musical genius and the politics of a distant age.
— Francis Ford Coppola

UPB welcomes yours book orders. These will ship from a distributor's warehouse. Web store orders only and other restrictions apply. See our home page side bar for specifics.

Our on-line fulfillment team is sheltering in place; none of our shipments come from store stock at this time.

For books we can't provide under current circumstances, visit our Bookshop page. Look at what we recommend, then search for whatever you like.

You can also can purchase eBooks and audio books through us. Distributed by Hummingbird, they include publications from the major publishing houses. Either access the side bar image link or the "EBOOKS/AUDIOBOOKS" menu item to reach our listings.

The UPB store front on Bancroft Way will be closed indefinitely.

No reading groups nor author events will meet. We may provide for remote, web-only gatherings in the future, if enough circumstances line up.

The Events link will reappear in the menu bar, once remote events get underway.