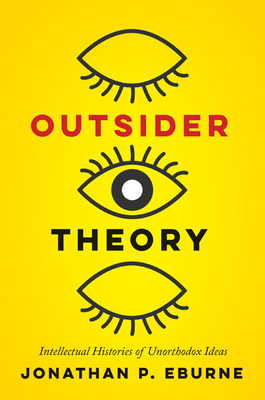 By Jonathan Eburne
$29.95
On Our Shelves Now

What do the Nag Hammadi library, Dan Brown’s The Da Vinci Code, speculative feminist historiography, Marcus Garvey’s finances, and maps drawn by asylum patients have in common? Jonathan P. Eburne explores this question as never before in Outsider Theory, a timely book about outlandish ideas. Eburne brings readers on an adventure in intellectual history that stresses the urgency of taking seriously—especially in an era of fake news—ideas that might otherwise be discarded or regarded as errant, unfashionable, or even unreasonable.

Examining the role of such thinking in contemporary intellectual history, Eburne challenges the categorical demarcation of good ideas from flawed, wild, or bad ones, addressing the surprising extent to which speculative inquiry extends beyond the work of professional intellectuals to include that of nonprofessionals as well, whether amateurs, unfashionable observers, or the clinically insane.

Considering the work of a variety of such figures—from popular occult writers and gnostics to so-called outsider artists and pseudoscientists—Eburne argues that an understanding of its circulation and recirculation is indispensable to the history of ideas. He devotes close attention to ideas and texts usually omitted from or marginalized within orthodox histories of literary modernism, critical theory, and continental philosophy, yet which have long garnered the critical attention of specialists in religion, science studies, critical race theory, and the history of the occult. In doing so he not only sheds new light on a fascinating body of creative thought but also proposes new approaches for situating contemporary humanities scholarship within the history of ideas.

However important it might be to protect ourselves from “bad” ideas, Outsider Theory shows how crucial it is for us to know how and why such ideas have left their impression on modern-day thinking and continue to shape its evolution.

Jonathan P. Eburne is associate professor of comparative literature, English, and French and Francophone studies at the Pennsylvania State University. He is author of Surrealism and the Art of Crime, coauthor of four other books, and editor of ASAP/Journal.

"A bracing challenge to academic squeamishness, Outsider Theory is a learned, mischievous, and fascinating book that makes a compelling argument for the positive role of fraud, failure, and error in knowledge production. Outsider art, writing, and thinking can no longer be neatly quarantined in isolated and eccentric individuals, but must be recognized as thoroughly implicated in mass culture, scholarship, laboratory work, and critical theory."—John Wilkinson, University of Chicago

"Jonathan P. Eburne has written a generous, curious, rigorous book about ideas often dismissed as ridiculous, embarrassing, and even dangerous. Outsider Theory takes them seriously, which means subjecting them to the same caliber of historical analysis and philosophical critique usually reserved for ‘good’ ideas. In doing so, he launches us on several fascinating voyages across what he calls ‘the oceanic expanse of modern intellectual history.’"—Evan Kindley, author of Poet-Critics and the Administration of Culture

"This timely book is not only genuinely interesting, but makes a strong and original contribution to the discussion concerning the future of the humanities. Jonathan P. Eburne's study of questions of method is itself an achievement of method, engaging with the outsiders not as a cabinet of curiosities, but in a way that troubles thinking, and especially thinking about thinking."—Margret Grebowicz, Tyumen State University