Before the Law: The Complete Text of Préjugés (Univocal) (Paperback) 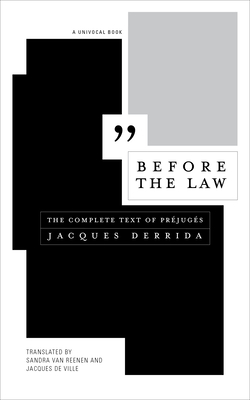 Thinking judgment in relation to the work of Jean-François Lyotard

“How to judge—Jean-François Lyotard?” It is from this initial question that one of France’s most heralded philosophers of the twentieth century begins his essay on the origin of the law, of judgment, and the work of his colleague Jean-François Lyotard. If Jacques Derrida begins with the term préjugés, it is in part because of its impossibility to be rendered properly in other languages and also contain all its meanings: to pre-judge, to judge before judging, to hold prejudices, to know “how to judge,” and more still, to be already prejudged oneself.

Striving to contain that which comes before the law, that is in front of the law and also prior to it, how to judge Jean-François Lyotard then becomes perhaps a beneficial attempt for Derrida to explore humanity’s rapport with judgment, origins, and naming. For how does one come to judge the author of the Differend? How does one abstain from judgment to accept the term préjugés as suspending judgment and at once as taking into account the impossibility of speaking before the law, prior to naming or judging? If this task indeed seems insurmountable, it is the site where Lyotard’s work itself is played out. Hence this sincere and intriguing essay presented by Jacques Derrida, published here for the first time in English.

Jacques Derrida (1930–2004) was director of studies at the École des hautes études en sciences sociales, Paris, and professor of humanities at the University of California, Irvine.

Sandra van Reenen is lecturer in French at the University of the Western Cape, South Africa.

Jacques de Ville is professor of law at the University of the Western Cape, South Africa. His recent publications include Jacques Derrida: Law as Absolute Hospitality and Constitutional Theory: Schmitt after Derrida.