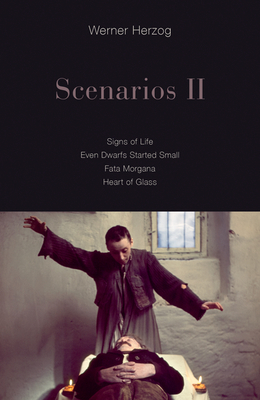 By Werner Herzog, Krishna Winston (Translated by)
$22.95
On Our Shelves Now

The second in a series: the master filmmaker’s prose scenarios for four of his notable films

On the first day of editing Fata Morgana, Werner Herzog recalls, his editor said: “With this kind of material we have to pretend to invent cinema.” And this, Herzog says, is what he tries to do every day. In this second volume of his scenarios, the peerless filmmaker’s genius for invention is on clear display. Written in Herzog’s signature fashion—more prose poem than screenplay, transcribing the vision unfolding before him as if in a dream—the four scenarios here (three never before translated into English) reveal an iconoclastic craftsman at the height of his powers.

Along with his template for the film poem Fata Morgana (1971), this volume includes the scenarios for Herzog’s first two feature films, Signs of Life (1968) and Even Dwarfs Started Small (1970), along with the hypnotic Heart of Glass (1976).

In a brief introduction, Herzog describes the circumstances surrounding each scenario, inviting readers into the mysterious process whereby one man’s vision becomes every viewer’s waking dream.

Werner Herzog has produced, written, and directed more than seventy films, including Nosferatu the Vampyre; Aguirre, the Wrath of God; Fitzcarraldo; and Grizzly Man. He grew up in a remote mountain village in Bavaria and now lives in Los Angeles. His books include Of Walking in Ice and Scenarios, both from Minnesota.

"Enigmatic and imaginative, Herzog creates an unfamiliar world in each screenplay through his evocative prose."—Publishers Weekly

"This follow-up to the previous collection, Scenarios, will please Herzog’s fans and intrepid readers of short fiction." —Library Journal