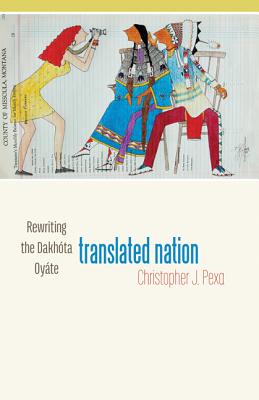 Translated Nation examines literary works and oral histories by Dakhóta intellectuals from the aftermath of the 1862 U.S.–Dakota War to the present day, highlighting creative Dakhóta responses to violences of the settler colonial state. Christopher Pexa argues that the assimilation era of federal U.S. law and policy was far from an idle one for the Dakhóta people, but rather involved remaking the Oyáte (the Océti Šakówi? Oyáte or People of the Seven Council Fires) through the encrypting of Dakhóta political and relational norms in plain view of settler audiences.

From Nicholas Black Elk to Charles Alexander Eastman to Ella Cara Deloria, Pexa analyzes well-known writers from a tribally centered perspective that highlights their contributions to Dakhóta/Lakhóta philosophy and politics. He explores how these authors, as well as oral histories from the Spirit Lake Dakhóta Nation, invoke thióšpaye (extended family or kinship) ethics to critique U.S. legal translations of Dakhóta relations and politics into liberal molds of heteronormativity, individualism, property, and citizenship. He examines how Dakhóta intellectuals remained part of their social frameworks even while negotiating the possibilities and violence of settler colonial framings, ideologies, and social forms.

Bringing together oral and written as well as past and present literatures, Translated Nation expands our sense of literary archives and political agency and demonstrates how Dakhóta peoplehood not only emerges over time but in everyday places, activities, and stories. It provides a distinctive view of the hidden vibrancy of a historical period that is often tied only to Indigenous survival.

Christopher Pexa is an enrolled member of the Spirit Lake Nation and assistant professor of English and affiliate of American Indian studies at the University of Minnesota.

"Christopher Pexa understands implicitly that kinship ties are essential to comprehending the values and symbols that drive tribal history, which is critical to correcting the misrepresentations that Indigenous people have had to endure. As such, Translated Nation, which includes interviews with relatives and community members, is a valuable contribution to Dakota studies, especially Pexa’s interpretations of Charles Eastman’s intellectual legacy."—David Martinez, Arizona State University

"A generous and generative work of scholarship, Christopher Pexa’s Translated Nation centers thióšpaye ethics as the source of thinking, writing, and performing Dakhóta values by indigenous intellectuals from the nineteenth century to the present. Pexa’s insightful readings of literary, archival, and conversational texts reveal the constant pulse of thióšpaye consciousness flowing through Dakhóta and English writings, rework the definition of archive, and show the power of translation to both illuminate and conceal. A most welcome and profound contribution. Hiyó:ta’c!"—Beth H. Piatote, author of Domestic Subjects: Gender, Citizenship, and Law in Native American Literature