The Red and the Black (Modern Library Classics) (Paperback) 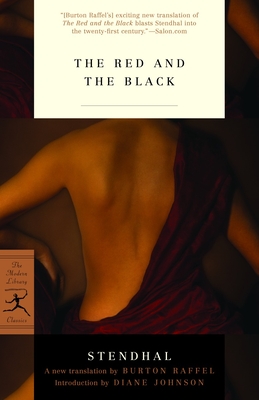 By Stendhal, Burton Raffel (Translated by), Diane Johnson (Introduction by)
$15.00
Ships from Warehouse, Usually in 1-8 Days

The Red and the Black, Stendhal’s masterpiece, is the story of Julien Sorel, a young dreamer from the provinces, fueled by Napoleonic ideals, whose desire to make his fortune sets in motion events both mesmerizing and tragic. Sorel’s quest to find himself, and the doomed love he encounters along the way, are delineated with an unprecedented psychological depth and realism. At the same time, Stendhal weaves together the social life and fraught political intrigues of post–Napoleonic France, bringing that world to unforgettable, full-color life. His portrait of Julien and early-nineteenth-century France remains an unsurpassed creation, one that brilliantly anticipates modern literature.

Neglected during its time, The Red and the Black has assumed its rightful place as one of the world’s great books, and Burton Raffel’s extraordinary new translation, coupled with an enlightening Introduction by Diane Johnson, helps it shine more brightly than ever before.

STENDHAL(Marie-Henri Beyle) was born in Grenoble in 1783. He served in Napoleon’s cavalry and thereafter lived in Italy and Paris, where he wrote many books, including On Love, the autobiographical Life of Henri Brulard, The Charterhouse of Parma (which he wrote in fifty-two days), and The Red and the Black. He died in 1842.

BURTON RAFFEL is a distinguished professor of humanities at the University of Louisiana at Lafayette. His many translations include Rabelais’s Gargantua and Pantagruel, winner of the 1991 French-American Foundation Translation Prize, Chrétien de Troyes’s Arthurian Romances, Cervantes’s Don Quijote, and Balzac’s Père Goriot. His translation of Beowulf has sold more than a million copies.

DIANE JOHNSON Is the author of ten novels—most recently Le Mariage and Le Divorce—two books of essays, two biographies, and the screenplay for Stanley Kubrick’s classic film The Shining. She has been a finalist four times for the Pulitzer Prize and the National Book Award.

“[Burton Raffel’s] exciting new translation of The Red and the Black blasts Stendhal into the twenty-first century.”
—Salon.com