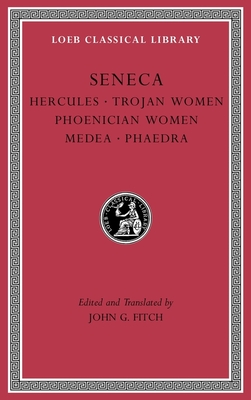 This is book number 62 in the Loeb Classical Library series.

Seneca is a figure of first importance in both Roman politics and literature: a leading adviser to Nero who attempted to restrain the emperor's megalomania; a prolific moral philosopher; and the author of verse tragedies that strongly influenced Shakespeare and other Renaissance dramatists.

Seneca's plays depict intense passions and interactions in rhetoric that is equally strong. Their perspective is much bleaker than that adopted in his prose writings. His plots are based on mythical episodes, in keeping with classical tradition. But the political realities of imperial Rome are also reflected in an obsessive concern with power and dominion over others. The Octavia is our sole surviving example of a Roman historical play; set at Nero's court, it was probably written by an admirer of Seneca as statesman and dramatist.

John G. Fitch has thoroughly revised his two-volume edition of Seneca's Tragedies to take account of the textual and interpretive scholarship that has appeared since its initial publication. His translation conveys the force of Seneca's dramatic language and the lyric quality of his choral odes.