The Rise of the Right to Know: Politics and the Culture of Transparency, 1945-1975 (Paperback) 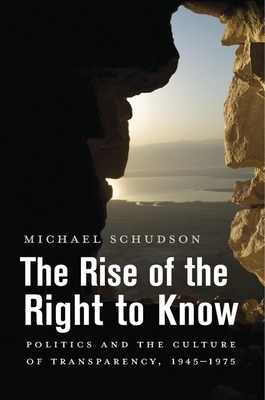 By Michael Schudson
$20.95
On Our Shelves Now

The American founders did not endorse a citizen's right to know. More openness in government, more frankness in a doctor's communication with patients, more disclosure in a food manufacturer's package labeling, and more public notice of actions that might damage the environment emerged in our own time.

As Michael Schudson shows in The Rise of the Right to Know, modern transparency dates to the 1950s, 1960s, and 1970s--well before the Internet--as reform-oriented politicians, journalists, watchdog groups, and social movements won new leverage. At the same time, the rapid growth of higher education after 1945, together with its expansive ethos of inquiry and criticism, fostered both insight and oversight as public values.

"One of the many strengths of The Rise of the Right To Know is its insistent emphasis on culture and its interaction with law...What Schudson shows is that enforceable access to official information creates a momentum towards a better use of what is disclosed and a refinement of how disclosure is best done."
--George Brock, Times Literary Supplement

"This book is a reminder that the right to know is not an automatic right. It was hard-won, and fought for by many unknown political soldiers."
--Monica Horten, LSE Review of Books