We're glad to continue serving customers, even though our former store front has closed, and we operate this web store under reduced services.

Click here or scroll to the bottom to review limits placed on orders. .

The War of Words (Paperback) 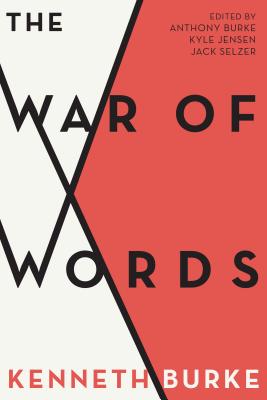 When Kenneth Burke conceived his celebrated “Motivorum” project in the 1940s and 1950s, he envisioned it in three parts. Whereas the third part, A Symbolic of Motives, was never finished, A Grammar of Motives (1945) and A Rhetoric of Motives (1950) have become canonical theoretical documents.

A Rhetoric of Motives was originally intended to be a two-part book. Here, at last, is the second volume, the until-now unpublished War of Words, where Burke brilliantly exposes the rhetorical devices that sponsor war in the name of peace. Discouraging militarism during the Cold War even as it catalogues belligerent persuasive strategies and tactics that remain in use today, The War of Words reveals how popular news media outlets can, wittingly or not, foment international tensions and armaments during tumultuous political periods. This authoritative edition includes an introduction from the editors explaining the compositional history and cultural contexts of both The War of Words and A Rhetoric of Motives. The War of Words illuminates the study of modern rhetoric even as it deepens our understanding of post–World War II politics.

Anthony Burke is Associate Professor Emeritus of Astronomy at the University of Victoria and the son of Kenneth Burke. Burke worked with his father to organize and catalog Kenneth Burke’s papers. He now contributes to maintaining the archives associated with Kenneth Burke’s cultural legacy.

Kyle Jensen is Associate Professor of English at the University of North Texas. He is the author of Reimagining Process and the coeditor of Abducting Writing Studies.

"The three coeditors of this posthumous publication—Anthony Burke, Kyle Jensen, and
Jack Selzer—have done a commendable job assembling this material, which efforts they
narrate fully in their valuable introduction. . . . [The War on Words is a] revealing remnant of Burke’s dissertation on motives, a companion volume to his Rhetoric. It is neither a sequel nor a prequel nor a detour nor
a summary; it is something more essential."
— European Legacy

University Press Books has closed its physical store, re-envisioning itself as an online bookseller, potentially reopening a different store front, temporary or permanent, sometime in the indefinite future.

Unlike previous times, these donations are NOT tax deductible. You're giving directly to the bookstore, a for-profit entity, to help us get back on our feet, not to the Arts Alliance, which has suspended its operations.

We greatly appreciate your support of the store with your book orders. Need a book without our current shopping limitations? We recommend Bookshop. View our recommendations on Bookshop, then search for whatever book you'd like.

Should you have questions, email us via our contact form. Since none of are keeping regular hours, it may take a day to get back with you.

The Cafe Ohlone has closed for the duration of the epidemic. They will probably reopen at a different location when they do.Visit makamham.com/cafeohlone for word on their curated dinner boxes.

For more than 45 years, UPB operated out of our address at 2430 Bancroft Way in Berkeley (at present still our mailing address). We're now operating on line and when possible at various pop up locations. Sign up to our mailing list for word on dates and locations of these.,/p>

Order from us. Let well-wrought words churn and burn within.