The Death Algorithm and Other Digital Dilemmas (Untimely Meditations #14) (Paperback) 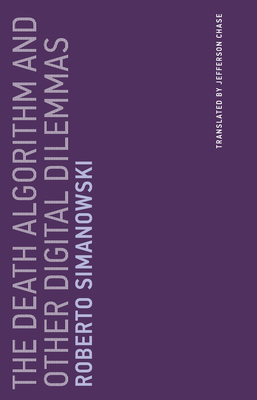 This is book number 14 in the Untimely Meditations series.

Provocative takes on cyberbullshit, smartphone zombies, instant gratification, the traffic school of the information highway, and other philosophical concerns of the Internet age.

In The Death Algorithm and Other Digital Dilemmas, Roberto Simanowski wonders if we are on the brink of a society that views social, political, and ethical challenges as technological problems that can be fixed with the right algorithm, the best data, or the fastest computer. For example, the "death algorithm " is programmed into a driverless car to decide, in an emergency, whether to plow into a group of pedestrians, a mother and child, or a brick wall. Can such life-and-death decisions no longer be left to the individual human?

In these incisive essays, Simanowski asks us to consider what it means to be living in a time when the president of the United States declares the mainstream media to be an enemy of the people--while Facebook transforms the people into the enemy of mainstream media. Simanowski describes smartphone zombies (or "smombies") who remove themselves from the physical world to the parallel universe of social media networks; calls on Adorno to help parse Trump's tweeting; considers transmedia cannibalism, as written text is transformed into a postliterate object; compares the economic and social effects of the sharing economy to a sixteen-wheeler running over a plastic bottle on the road; and explains why philosophy mat become the most important element in the automotive and technology industries.