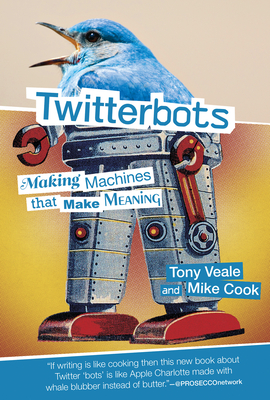 The world of Twitterbots, from botdom's greatest hits to bot construction to the place of the bot in the social media universe.

Twitter offers a unique medium for creativity and curiosity for humans and machines. The tweets of Twitterbots, autonomous software systems that send messages of their own composition into the Twittersphere, mingle with the tweets of human creators; the next person to follow you on Twitter or to "like" your tweets may not a person at all. The next generator of content that you follow on Twitter may also be a bot. This book examines the world of Twitterbots, from botdom's greatest hits to the hows and whys of bot-building to the place of bots in the social media landscape.

In Twitterbots, Tony Veale and Mike Cook examine not only the technical challenges of bending the affordances of Twitter to the implementation of your own Twitterbots but also the greater knowledge-engineering challenge of building bots that can craft witty, provocative, and concise outputs of their own. Veale and Cook offer a guided tour of some of Twitter's most notable bots, from the deadpan @big_ben_clock, which tweets a series of BONGs every hour to mark the time, to the delightful @pentametron, which finds and pairs tweets that can be read in iambic pentameter, to the disaster of Microsoft's @TayAndYou (which "learned" conspiracy theories, racism, and extreme politics from other tweets). They explain how to navigate Twitter's software interfaces to program your own Twitterbots in Java, keeping the technical details to a minimum and focusing on the creative implications of bots and their generative worlds. Every Twitterbot, they argue, is a thought experiment given digital form; each embodies a hypothesis about the nature of meaning making and creativity that encourages its followers to become willing test subjects and eager consumers of automated creation.

Some bots are as malevolent as their authors. Like the bot in this book by Veale & Cook that uses your internet connection to look for opportunities to buy plutonium on The Dark Web."
--@PROSECCOnetwork

"If writing is like cooking then this new book about Twitter 'bots' is like Apple Charlotte made with whale blubber instead of butter."
--@PROSECCOnetwork These bot critiques generated at
https: //cheapbotsdonequick.com/source/PROSECCOnetwork