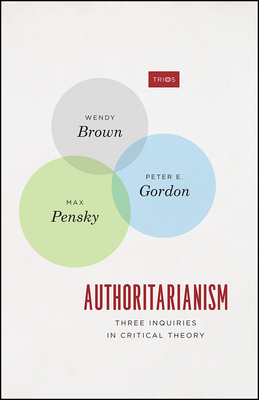 Across the Euro-Atlantic world, political leaders have been mobilizing their bases with nativism, racism, xenophobia, and paeans to “traditional values,” in brazen bids for electoral support. How are we to understand this move to the mainstream of political policies and platforms that lurked only on the far fringes through most of the postwar era?  Does it herald a new wave of authoritarianism? Is liberal democracy itself in crisis?

In this volume, three distinguished scholars draw on critical theory to address our current predicament.  Wendy Brown, Peter E. Gordon, and Max Pensky share a conviction that critical theory retains the power to illuminate the forces producing the current political constellation as well as possible paths away from it.  Brown explains how “freedom” has become a rallying cry for manifestly un-emancipatory movements; Gordon dismantles the idea that fascism is rooted in the susceptible psychology of individual citizens and reflects instead on the broader cultural and historical circumstances that lend it force; and Pensky brings together the unlikely pair of Tocqueville and Adorno to explore how democracies can buckle under internal pressure. These incisive essays do not seek to smooth over the irrationality of the contemporary world, and they do not offer the false comforts of an easy return to liberal democratic values. Rather, the three authors draw on their deep engagements with nineteenth–and twentieth–century thought to investigate the historical and political contradictions that have brought about this moment, offering fiery and urgent responses to the demands of the day.

Wendy Brown is Class of 1936 First Professor of Political Science at the University of California, Berkeley.  Her most recent books are Walled States, Waning Sovereignty and Undoing the Demos: Neoliberalism’s Stealth Revolution.  Peter E. Gordon is the Amabel B. James Professor of History at Harvard University. His most recent books are Continental Divide: Heidegger, Cassirer, Davos, and Adorno and Existence. Max Pensky is Professor of Philosophy at Binghamton University. He is the author of MelancholyDialectics and The Ends of Solidarity.

"In this slim volume, three authors bring critical theory to bear on the swelling, confounding conjuncture of neoliberal, market fundamentalism and right-wing, nativist, racist, reactionary populist authoritarianism. Brown braids together Milton Friedman, Friedrich Hayek, Friedrich Nietzsche, and Herbert Marcuse to give an account of aggrieved power and anointed wounds. Gordon revisits Theodor Adorno’s The Authoritarian Personality, showing that Adorno would read the contemporary authoritarian culture industry as (following Leo Lowenthal) an exercise of psychoanalysis in reverse, finding a play-acting mob enjoying a simulacrum of desublimated repression that permits the economic status quo to persist unchanged. Pensky, via Alexis de Toqueville and Adorno, reads a cultural-functional numbing via legal-bureaucratic authoritarianism that gently infuses contemporary psychic structures, displacing and hollowing out the political potential for the powers of subjectivity. Is such a pallid life always already implicit in the functioning of liberal democracy under capital as its subjects vote in authoritarianism? Can critique act as a bulwark against authoritarianism? Recommended."
— CHOICE

“Three penetrating essays which dazzle both in substance and style. Brown, Gordon, and Pensky give us an insightful analysis of the dialectics and dynamics of authoritarianism, neo-liberalism, and democracy. This book is a must read for all those concerned to understand the predicament of our times.”
— Seyla Benhabib, Yale University

“If you are concerned by this political moment, first of all,—organize and vote. Then read these sharp critical reflections. In dialogue with each other, they give welcome new life in particular to Hayek, Adorno, and Tocqueville as they think through the possible futures of the rationality, culture, and habitus of democratic life.”
— Bonnie Honig, Brown University

“A brilliant and urgent assessment of democracy’s current crisis and capitalism’s increasing authoritarianism. Channeling the insights of Nietzsche, Marcuse, Adorno, and Tocqueville with clarity and moral force, this trilogy of essays inaugurates a new mode of critical political theory while offering a profound diagnosis of this moment’s political ills.”
— Astra Taylor, author of Democracy May Not Exist, but We’ll Miss It When It's Gone