Paper Minds: Literature and the Ecology of Consciousness (Paperback) 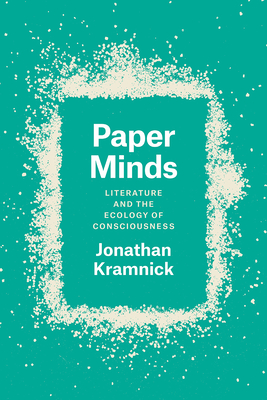 By Jonathan Kramnick
$25.00
On Our Shelves Now

How do poems and novels create a sense of mind? What does literary criticism say in conversation with other disciplines that addresses problems of consciousness? In Paper Minds, Jonathan Kramnick takes up these vital questions, exploring the relations between mind and environment, the literary forms that uncover such associations, and the various fields of study that work to illuminate them.
Opening with a discussion of how literary scholarship’s particular methods can both complement and remain in tension with corresponding methods particular to the sciences, Paper Minds then turns to a series of sharply defined case studies. Ranging from eighteenth-century poetry and haptic theories of vision, to fiction and contemporary problems of consciousness, to landscapes in which all matter is sentient, to cognitive science and the rise of the novel, Kramnick’s essays are united by a central thematic authority. This unified approach of these essays shows us what distinctive knowledge that literary texts and literary criticism can contribute to discussions of perceptual consciousness, created and natural environments, and skilled engagements with the world.

Jonathan Kramnick is the Maynard Mack Professor of English and director of the Lewis Walpole Library at Yale University. He is the author of Making the English Canon and Actions and Objects from Hobbes to Richardson.

“A profound and searching defense and description of a field that has sometimes seemed impossibly undisciplined. . . . Nuanced and persuasive. . . . In its exemplification of how literary knowledge emerges from close reading and attains definition through rigorous comparison with the discoveries of other fields, Paper Minds is essential. If I had to pick one recent book to recommend to someone curious about what good work in literary studies looks like, I would pick this.”
— Los Angeles Review of Books

"In Kramnick's terms, literature is good at representing character’s mental enmeshment in earth and material and flesh precisely because these practices are like those that critics use--and teach students to use--as they write professionally about the world. Literary criticism becomes in this account a practical kind of handicraft at the level of the sentence. . . . [A] beautifully made and well-timed point about the value of literary-critical thinking in its specificity. . . . [A] careful plea . . . for literary representation as a site of action in the world."

"Indeed, that is the thesis of this elegantly written, intellectually provocative study, as Kramnick states at the outset: 'Literary criticism [and literature itself] . . . should be credited with having something to say about questions that many people care about[,] from the ground and shape of conscious experience to interactions with designed and everyday environments' (x). Paper Minds makes his case profoundly and persuasively."
— Elizabeth Kraft

Knowing and understanding the world, Kramnick argues, requires various disciplines, each with its own methodologies and questions, each with its own subjects. Interdisciplinarity can produce new ways of knowing, but—and this is Kramnick’s focus—literary studies yields its own unparalleled insights that are worth defending and cultivating... Kramnick’s thoughtful and thought-provoking essays, pieces of writing that linger long after you’ve read them, return with urgency to a central point: we are
well to remember that literary criticism explains the world in ways that other disciplines cannot."
— Tita Chico

"In this series of elegantly connected essays, Jonathan Kramnick excavates a kinetic, haptic, and immersive alternative to contemplative aesthetics in the eighteenth century and follows its ramifications into contemporary debates about theory of mind. How does free indirect discourse offer its own way of working through the 'hard problem' of consciousness? What can apostrophe teach us about the supposed divide between perceiving the world and acting in it? Moving deftly from locodescriptive poetry and common sense philosophy to novels about cognitive science, these astute and sometimes polemical writings broaden our understanding of what an aesthetics and ethics of everyday dwelling might be and of how literary forms provide unique insight on theories of perception."
— Sianne Ngai, University of Chicago

"Paper Minds places literary study proudly in the company of other university disciplines, both in theory and in practice. Kramnick's philosophic concerns and his precision about cognition drive brilliant readings that range from all but forgotten landscape poems, to old novels as obscure as The Blazing World or as familiar as Robinson Crusoe, to prize-winning novelists of the present century. He probes the mystery of conscious experience with revelatory lucidity. His aesthetics of craft and the everyday--if perhaps tinged with urban nostalgia--precisely carve out an alternative to the classic aesthetics of distance."
— John Bender, Stanford University

“The essays assembled here are distinguished by a supple, eloquent prose and by their humane tone. They offer an eye-opening picture of how, from the eighteenth century onward, a particular set of literary forms has made it possible to set down ‘perceptual or emotional or cognitive experience on the page.’ Paper Minds is a landmark book both for scholars of eighteenth-century literary studies and for scholars from other periods working at the intersection between literary analysis and cognitive science."
— Deidre Shauna Lynch, Harvard University

"Paper Minds is beautifully written in elegant, witty prose with maximum clarity. It makes original contributions to at least three fields: cognitive literary criticism, eighteenth-century British studies, and the study of contemporary literature. This is a book to read and re-read carefully, and to feature prominently in any discussion concerning the contributions and merits of a cognitive approach to literature."
— Alan Richardson, Boston College, author of The Neural Sublime

"These often-exquisite pieces can be seen (or rather felt) as dynamic manipulations of all possible forms of embodied thought. . . . Kramnick treats seeing, representing, and thinking as manual arts and haptic skills honed where aesthetics and epistemology meet. He celebrates the georgic perspectives and techniques that equally undergird the early novel, the loco-descriptive poem, and philosophy both on (Locke, Kant) and off the wall (Margaret Cavendish)."
— Jayne Lewis