Leo Strauss on Political Philosophy: Responding to the Challenge of Positivism and Historicism (The Leo Strauss Transcript Series) (Hardcover) 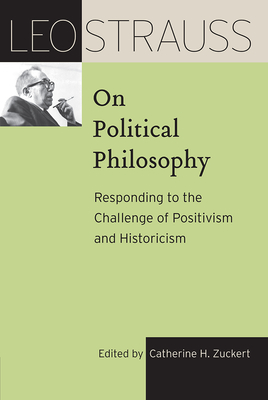 Leo Strauss is known primarily for reviving classical political philosophy through careful analyses of works by ancient thinkers. As with his published writings, Strauss’s seminars devoted to specific philosophers were notoriously dense, accessible only to graduate students and scholars with a good command of the subject. In 1965, however, Strauss offered an introductory course on political philosophy at the University of Chicago. Using a conversational style, he sought to make political philosophy, as well as his own ideas and methods, understandable to those with little background on the subject.

Leo Strauss on Political Philosophy brings together the lectures that comprise Strauss’s “Introduction to Political Philosophy.” Strauss begins by emphasizing the importance of political philosophy in determining the common good of society and critically examining the two most powerful contemporary challenges to the possibility of using political theory to learn about and develop the best political order: positivism and historicism. In seeking the common good, classical political philosophers like Plato and Aristotle did not distinguish between political philosophy and political science. Today, however, political philosophy must contend with the contemporary belief that it is impossible to know what the good society really is. Strauss emphasizes the need to study the history of political philosophy to see whether the changes in the understanding of nature and conceptions of justice that gradually led people to believe that it is not possible to determine what the best political society is are either necessary or valid. In doing so, he ranges across the entire history of political philosophy, providing a valuable, thematically coherent foundation, including explications of many canonical thinkers, such as Auguste Comte and Immanuel Kant, about whom Strauss did not write extensively in his published writings.

Leo Strauss (1899–1973) was one of the preeminent political philosophers of the twentieth century. Catherine H. Zuckert is the Nancy R. Dreux Professor of Political Science Emeritus at the University of Notre Dame and the author or coauthor of many books, including, most recently, Machiavelli’s Politics.