We're glad to continue serving customers, even though our former store front has closed, and we operate this web store under reduced services.

Click here or scroll to the bottom to review limits placed on orders. .

Beyond Weird: Why Everything You Thought You Knew about Quantum Physics Is Different (Hardcover) 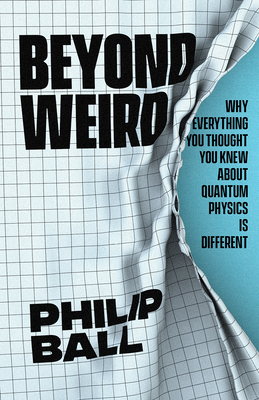 “Anyone who is not shocked by quantum theory has not understood it.”

Since Niels Bohr said this many years ago, quantum mechanics has only been getting more shocking. We now realize that it’s not really telling us that “weird” things happen out of sight, on the tiniest level, in the atomic world: rather, everything is quantum. But if quantum mechanics is correct, what seems obvious and right in our everyday world is built on foundations that don’t seem obvious or right at all—or even possible.

An exhilarating tour of the contemporary quantum landscape, Beyond Weird is a book about what quantum physics really means—and what it doesn’t. Science writer Philip Ball offers an up-to-date, accessible account of the quest to come to grips with the most fundamental theory of physical reality, and to explain how its counterintuitive principles underpin the world we experience. Over the past decade it has become clear that quantum physics is less a theory about particles and waves, uncertainty and fuzziness, than a theory about information and knowledge—about what can be known, and how we can know it.  Discoveries and experiments over the past few decades have called into question the meanings and limits of space and time, cause and effect, and, ultimately, of knowledge itself. The quantum world Ball shows us isn’t a different world. It is our world, and if anything deserves to be called “weird,” it’s us.

Philip Ball is a freelance writer and broadcaster, and was an editor at Nature for more than twenty years. He writes regularly in the scientific and popular media and has written many books on the interactions of the sciences, the arts, and wider culture, including H2O: A Biography of Water and The Music Instinct. His book Critical Mass won the 2005 Aventis Prize for Science Books. Ball is also a presenter of Science Stories, the BBC Radio 4 series on the history of science. He trained as a chemist at the University of Oxford and as a physicist at the University of Bristol. He lives in London.

“Ball’s gorgeously lucid text takes us to the edge of contemporary theorizing about the foundations of quantum mechanics. Beyond Weird is easily the best book I’ve read on the subject.”
— Washington Post

"The intention of Beyond Weird, though, is not simply to provide a dummy’s guide to the theory, but to explore its underlying meaning. We know that the equations work, but what sort of world do they really represent? To tackle the question, he weighs up the competing interpretations, and the misconceptions, that have attached themselves to quantum theory in its 100-year history, finishing with more recent attempts to rebuild the theory 'from scratch', and new ideas that offer tantalising glimpses beyond. . . . [A] laudable achievement."

“[A] clear and deeply researched account of what’s known about the quantum laws of nature, and how to think about what they might really mean.”
— Nature

“An excellent account of modern quantum theory and the efforts being made to harness its effects.”
— The Spectator

“It would be easy to think 'Surely we don't need another book on quantum physics.' There are loads of them. . . . Don't be fooled, though - because in Beyond Weird, Philip Ball has done something rare in my experience. . .it makes an attempt not to describe quantum physics, but to explain why it is the way it is.”
— PopScience Books

"If so great a physicist as Richard Feynman once claimed that 'nobody understands quantum mechanics,' what hope do we laypeople have? Luckily, Philip Ball, a freelance writer (formerly of Nature magazine) who has published widely on the history of science, tackles the subject in a user-friendly yet thorough introduction. . . . Replacing 'obscure terminology' with accessible ideas and drawings, Ball makes would-be physicists of us all."

"Ball . . . asks lots of questions, including rhetorical ones, and uses words like 'we' and 'let's' to turn readers into collaborators. The tone is reassuring; he never talks down to nonscientists. Instead, he invites them to join in exploring this 'new and unfamiliar logic' in which what we understand and how we measure something has an effect on what we observe. Replacing 'obscure terminology' with accessible ideas and drawings, Ball makes would-be physicists of us all."
— Foreword Reviews

"Philip Ball is one of the finest contemporary writers about science. . . . His prose is a pleasure to read."
— Wall Street Journal

University Press Books has closed its physical store, re-envisioning itself as an online bookseller, potentially reopening a different store front, temporary or permanent, sometime in the indefinite future.

Unlike previous times, these donations are NOT tax deductible. You're giving directly to the bookstore, a for-profit entity, to help us get back on our feet, not to the Arts Alliance, which has suspended its operations.

We greatly appreciate your support of the store with your book orders. Need a book without our current shopping limitations? We recommend Bookshop. View our recommendations on Bookshop, then search for whatever book you'd like.

Should you have questions, email us via our contact form. Since none of are keeping regular hours, it may take a day to get back with you.

The Cafe Ohlone has closed for the duration of the epidemic. They will probably reopen at a different location when they do.Visit makamham.com/cafeohlone for word on their curated dinner boxes.

For more than 45 years, UPB operated out of our address at 2430 Bancroft Way in Berkeley (at present still our mailing address). We're now operating on line and when possible at various pop up locations. Sign up to our mailing list for word on dates and locations of these.,/p>

Order from us. Let well-wrought words churn and burn within.