Designs of Destruction: The Making of Monuments in the Twentieth Century (Hardcover) 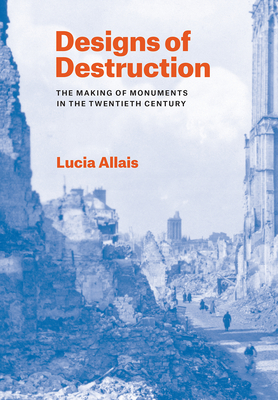 The twentieth century was the most destructive in human history, but from its vast landscapes of ruins was born a new architectural type: the cultural monument. In the wake of World War I, an international movement arose which aimed to protect architectural monuments in large numbers, and regardless of style, hoping not only to keep them safe from future conflicts, but also to make them worthy of protection from more quotidian forms of destruction. This movement was motivated by hopeful idealism as much as by a pragmatic belief in bureaucracy. An evolving group—including architects, intellectuals, art historians, archaeologists, curators, and lawyers—grew out of the new diplomacy of the League of Nations. During and after World War II, it became affiliated with the Allied Military Government, and was eventually absorbed by the UN as UNESCO. By the 1970s, this organization had begun granting World Heritage status to a global register of significant sites—from buildings to bridges, shrines to city centers, ruins to colossi.
Examining key episodes in the history of this preservation effort—including projects for the Parthenon, for the Cathedral of St-Lô, the temples of Abu Simbel, and the Bamyian Buddahs —Lucia Allais demonstrates how the group deployed the notion of culture to shape architectural sites, and how architecture in turn shaped the very idea of global culture. More than the story of an emergent canon, Designs of Destruction emphasizes how the technical project of ensuring various buildings’ longevity jolted preservation into establishing a transnational set of codes, values, practices. Yet as entire nations’ monumental geographies became part of survival plans, Allais also shows, this paradoxically helped integrate technologies of destruction—from bombs to bulldozers—into cultural governance. Thus Designs of Destruction not only offers a fascinating narrative of cultural diplomacy, based on extensive archival findings; it also contributes an important new chapter in the intellectual history of modernity by showing the manifold ways architectural form is charged with concretizing abstract ideas and ideals, even in its destruction.

Lucia Allais is associate professor of architecture at Princeton University, a member of the Aggregate Architectural Collaborative, and an editor of the journal Grey Room.

"Designs of Destruction is an account of the media and material cultures underlying the designation and construction of monuments from the early 20th century through the 1960s. Through deft analyses and nuanced interpretations of archival materials, Allais argues that monuments were 'made,' conjured as much from bureaucratic and diplomatic paperwork as they were built from stone, sand, and aggregate. . . . Call it what you like: architectural history of preservation; media history; institutional history of architectural preservation; or media history of international architectural governance. No matter the designation, this is a book for the ages."
— Los Angeles Review of Books

“Lucia Allais points out in no uncertain terms that monuments were recast as much to justify the obliteration of the old 19th-century and earlier buildings around them as to manufacture support for the post-war theories of urban design. She therefore very cleverly brings together the histories of modern architecture and of monument preservation. . . . Rarely does one come across a book as novel as this one. It covers immense tracts of ground.”
— Times Higher Education, Book of the Week

"With the architectural object placed centre stage, and with an apt eye for both canonical figures and those who reside in the shadows of architectural historiography, Allais demonstrates the ways in which ancient monuments (with their complex temporalities and authorships) have been conjured into new forms of existence, in changing presents....In its erudite complexities, Designs of Destruction strangely reads as a page-turner."
— Architectural Histories

"[Designs of Destruction] is the product of historical work that sees architecture as field rather than edifice and that forensically reconstructs a march of events in order to discern the microtechnique of construction....  Allais makes a compelling case for monument survival as a field at least as dynamic as modern architecture itself."
— Art Journal

"Designs of Destruction is a well-re-searched, well-written, and engaging book that successfully bridges the gaps between architectural history, preservation policy and practice, and international relations.... a must-read for any scholar interested in alternative constructions of modernity and the global history of historic preservation."
— Journal of the Society of Architectural Historians

"Allais’s discerning excavation of the material processes of canon-making andtheir residual effects (if not collateral) is a welcome addition to the field, not onlyfor those interested in the twentieth-century history of preservation but thoseengaged in any form of adjudication about what goes in to, and what is leftout of, the global and historical narratives we tell about architecture."
— The Journal of Architecture